DC Nation chatted with Jones about Wonder Girl’s journey from Boise to Brazil, what makes the younger Yara different from the one we saw in Future State, new and old villains, how this series connects to what’s currently unfolding in Wonder Woman and, of course, Jerry the Pegasus.

Yara Flor has received a very enthusiastic response from DC fans. What’s it been like to watch the reception to a brand-new character you’ve created?

Yara’s introduction and the response to her has been really exciting for me. I’ve been writing and drawing her for months in isolation. I was a bit nervous about how she’d be received once she was out in the world. I’m really happy that people are enjoying her.

Readers first met Yara as the Wonder Woman of Future State. How is the character different when we meet her in Wonder Girl? What important elements remain constant?

Yara still has the same joie de vivre, but with maybe a little less experience.  And she’s going to gain that experience along the way…it’s a long road. But one thing you’ll recognize straight away from Future State is her unique swagger.

Yara’s taking the rather significant trip from Boise to Brazil. What can you share about the world she’s arriving in?

The story picks up with a brief vignette of Yara saying goodbye to her aunt at the Boise airport and then it’s straight on to Brazil. It’s maybe a little Dorothy…this trip opens up a huge world to her full of exciting characters. It’s incredibly exciting for her, but full of challenges both fun and dangerous.

Can you drop any hints about the threats Yara faces in the opening arc? In Infinite Frontier #0, we see she’s being followed…

I’m definitely going to be introducing some new villains into her story and possibly some villains you may have seen before. I’m really excited about the supporting characters I’m bringing in, and maybe even a love interest…

Wonder Woman’s status quo has been dramatically changed by recent events. How much of a role does she play here (even if it’s an indirect one)?

Yara’s origin story and journey will very much be a part of what’s going forward in Wonder Woman. And a few other books…

I wish I could say more but I can’t.  Some things you’re just going to have to wait for.

How long until we see Jerry the Pegasus in Wonder Girl?

Soon. Be patient. Ha! I’m just as excited to draw him as people are to see him again. It’s going to be fun!

Wonder Girl #1, by Joëlle Jones and Jordie Bellaire, is now available in print and as a digital comic book. 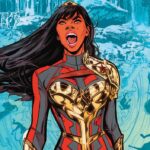