When the humans are away, the animals come out to play, or in this case, when the superhero is away, the super-pets come out to save the world. Coming next summer, Dwayne Johnson is cast as Krypto the Superdog in Warner Bros. new animated movie, DC League of Super-Pets. The movie is going to be produced by Johnson’s production company, Seven Bucks, which already has a full plate with Ball and Chain (Dwayne Johnson and Emily Blunt become superheroes!) and  Jungle Cruise, just to name a couple. The movie is going to focus on Superman’s dog, Krypto, who teams up with a flying cat (Streaky the Supercat??) to stop crime while the Man of Steel is on vacation.

So Who Are Krypto And The Super-Pets Anyway? 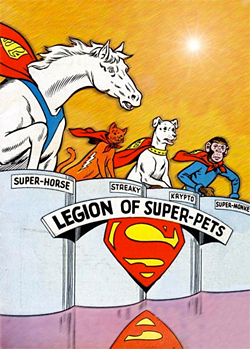 The Legion of Super-Pets Image via the cover to Adventure Comics #322, by Curt Swan/DC Comics

The Legion of Super-Pets first appeared in Adventure Comics #293 in 1962 and included Krypto the Superdog, Streaky the Supercat, Beppo the Super-Monkey, and Comet the Super-Horse, although Krypto, Streaky, and Beppo had all appeared individually in earlier issues. They stopped appearing in 1986 but were later brought back to mainstream comics in 2017.

DC League of Super-Pets will be co-directed by Sam Levine and Patricia Hicks, Jared Stern Johnson, Dany Garcia, and Hiram Garcia are producing the film. John Requa, Glenn Ficarra, and Nicholas Stoller are executive producing. The film is based on characters from DC. Superman created by Jerry Siegel and Joe Shuster. A larger voice-over cast will be announced in the near future.

Next year is already looking like a big one for Johnson as he announced an official release date for Black Adam and his sitcom TV series, Young Rock, got renewed for a second season last month. And while he didn’t run for President in 2020, there’s always a potential run in 2024.

The DC League of Super-Pets is going to be released in theaters May 20, 2022.

Are you excited that Dwayne Johnson is cast as Krypto? Let us know in the comments below!