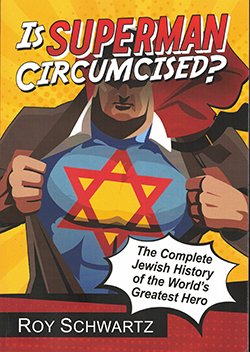 SAN DIEGO — The answer to the question, “Is Superman circumcised?” in literature probably would depend on what the custom might have been on Krypton concerning the ceremony we Jews know as brit milah.  Such an operation would have been impossible on Earth.  If a bullet couldn’t penetrate Superman’s skin; how futile would be the use of a mohel’s life?

On the other hand, my grandson Shor Masori, who delights in such discussions, points out that Superman is able to shave–not with a Gillette blade or electric razor –but by bouncing his laser vision off a mirror to trim his Super-Hair.  So, perhaps,  by some other super means and had he wanted to do so, he could have self-circumcised.

Notwithstanding all that,  the question posed on the book’s cover really isn’t one so much about Superman’s anatomy as it is about the subtexts of his heritage. In one chapter, we read the literary argument that Superman is a Moses figure — released on a voyage by parents wanting to save him from annihilation — and in another chapter we read a counter-argument that he is a Jesus figure, sent by his father to redeem the world.  The next chapter offers a compromise: The Superman created by Jerry Siegel and Joe Shuster drew on their Jewish roots, but the Superman later presented on television and in the movies was a Christianized version.

The back and forth of religious bragging rights is only the beginning of this scholarly work, which sent me scrambling on several occasions to my dictionary.  Later in the volume, author Schwartz discusses how comic books were considered the underclass of literature, and thus open to Jewish writers, as higher forms of literature were not.  American Jews brought to comic books their strivings, ideals, resentments, and wish fulfillments.  While Jews in the 1930s and 1940s might have been as meek as Clark Kent, inside them boiled a desire to triumph over oppressors, especially Nazis and their imitators.

Some of the World War II Superman comics offered fertile grounds for pop psychology.  The cover of Action Comics No. 44 showing Superman destroying a long barrel of heavy Nazi artillery is seen as a desire to emasculate the enemy.  Meanwhile, Superman’s commitment to “Truth, Justice and the American Way” manifests itself in kindness not only to the victims of the bad guys, but also to the  bad guys themselves.  Superman wants prison conditions to be humane.  He follows the Deuteronomist’s injunction, ‘Justice, Justice Shall Thou Pursue.”

The various essays utilize Superman as a jumping off point for numerous interesting discussions. In one the author ponders that Superman had a dual identity; he was both an American and a Kryptonian.  He was an immigrant.  He was the Man of Steel, who sought to fit in as the Mild-Mannered Reporter.  Deep down, who was he really?  Jewish immigrants could easily relate to such identity confusion.

In another essay, Superman is compared to the Golem, an incredibly powerful creature fashioned from clay by Rabbi Judah Loew ben Bezalel, known popularly as the Maharal.  The Golem was a protector of the innocent, until he got out of control and had to be deactivated by the famous rabbi of Prague.  The legend of the Golem was a forerunner of the Frankenstein’s monster tale written by Mary Shelley.  So, the question arises, what would happen if Superman got off the rails and turned from all-around-good-guy into a monster?  DC Comic writers explored that issue on more than one occasion, at some times creating a Bizarro Superman, and other times having him act out of character as a result of exposure to red kryptonite.

Many of  the essays offer the opportunity to plunge deeply into Torah and Talmudic learning while never leaving popular culture too far behind.  Is Superman Circumcised is the kind of book that will be adored by fans of Comic-Con–of which there are many thousands living in San Diego, and many others who come to San Diego for each convention.  Possibly the book will be sold at the new Comic-Con Museum in Balboa Park, after its projected Fall opening to the public.

It’s fun, it’s scholarly, and it’s long.  Don’t try to read it straight through.  Instead, enjoy it pausing between episodes, just as Superman Comics were also meant to be consumed.

*
Donald H. Harrison is editor of San Diego Jewish World.  He may be contacted via [email protected]